The active Capital of Azerbaijan hosted the Games under the motto “Solidarity is our strength.” The Solidarity Games are an occasion to bring Islamic countries together, strengthening relations among them and encouraging solidarity.
Many young people participated to the multinational Games in an cheering and friendly atmosphere.

Baku is a modern and international city that embodies Islamic traditions within a contemporary society. The city has been able to promote sustainable growth, bringing together modernity and tradition under one roof.

The Games started on 12 May with a beautiful Opening Ceremony featuring a universal story of peace and hope, held with spectacular special effects and fireworks.

As there are Five Pillars in Islam, there are Four Core Values of the 4th Islamic Solidarity Games:

The purpose of the Games is to bring together people from all over the Islamic world, working together as one people and one team, celebrating harmony and peace, overcoming boundaries and celebrating the world as a whole, where religion, history, traditions and respect can coexist and bring a higher sense of purpose to all. The Games are meant to be inspired by excellence, as this quality is the funding principle of every human action aiming at true good.

Baku was chosen for this important event among many hosts, and was awarded the Games at the General Assembly of the ISSF in Jeddah in July 2013. The Organising Committee was set up by the decree of the President of the Republic of Azerbaijan Mr. Ilham Aliyev.
Athletes from 54 Islamic countries around the world were in these days representing their nations. The Competition lasted 10 days and included 20 different sports with a total of 23 disciplines: Athletics and Para Athletics, Aquatics – Diving, Aquatics – Swimming, Aquatics – Water Polo, Basketball 3×3, Football, Gymnastics – Artistic, Gymnastics – Rhythmic, Wushu, Table Tennis, Handball, Judo and Blind Judo, Wrestling – Greco, Wrestling – Freestyle, Shooting, Tennis, Volleyball, Boxing, Zurkhaneh, Karate, Taekwondo and Weightlifting.

The 4th Islamic solidarity Games mascots were the Karabakh horses “İncə” (tender) and “Cəsur” (brave). Karabakh horses are considered a high value resource of Azerbaijan. “İncə” is the representation of compassion and beauty, while “Cəsur” embodies bravery and perseverance. 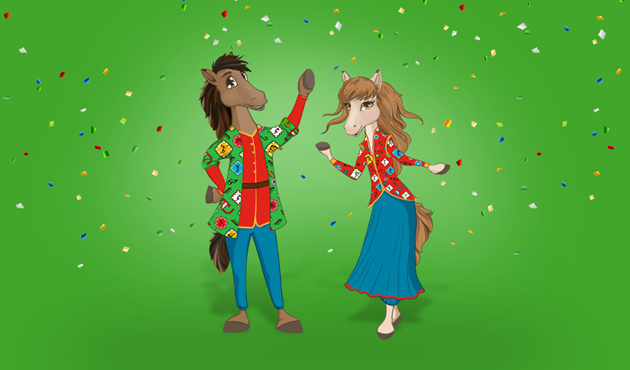 The Azerbaijani national team won the first place in the medal standings:

The second place in the medal standings was taken by the Turkish national team:

Iran won the third place in the medal standings:

All the events were held in Baku in 16 major sporting venues of the Capital.

More information on the 4th Islamic solidarity Games can be found on the official website:
https://www.baku2017.com