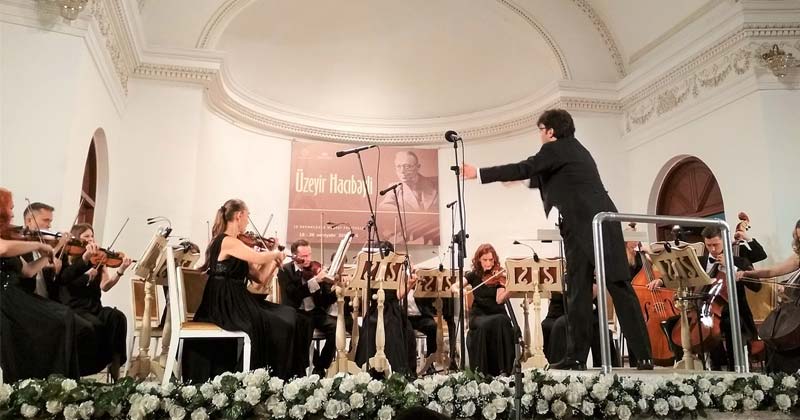 The celebration was part of the X Uzeyir Hajibeyov International Music Festival, held at the Heyday Aliyev Foundation.

The Festival reaches its tenth edition and it’s held every September since 2009 in Baku and in other cities all across Azerbaijan. The Festival running from 18 to 26 September 2018 was organised by the Ministry of Culture and the Heyday Aliyev Foundation.

Musicians from all over the world participated at the festival, together with Azerbaijani musicians. This edition enjoyed about 30 concerts, some of them performed by well known musicians from Italy, Russia, US, Turkey and Slovenia.

Beside the concerts, the Uzeyir Hajibeyov International Music Festival included conferences and workshops mainly focussed on the Hajibeyov’s creative heritage.

Hajibeyov (1885-1948) is considered the pioneer for modern Azerbaijani music. He has been recognised as a creative genius who was able to combine the national ethnic music with classical music. The reach of his influence goes far beyond the Caspian Region. By merging traditional and western styles and being credited with the invention of Azerbaijani musical comedy, his contribution to music remains remarkable.

One of Hajibeyov’s major legacies was bringing forward the idea of establishing a professional music school. He was ahead of his time and fought for the idea of women’s emancipation in a male-dominated society.

The Uzeyir Hajibeyov International Music Festival is a high-profile musical event in Azerbaijan and is part of a wide range of cultural activities running throughout the Country during the year.