The Heydar Aliyev Center: fluidity of shapes and representation of the new Azerbaijan 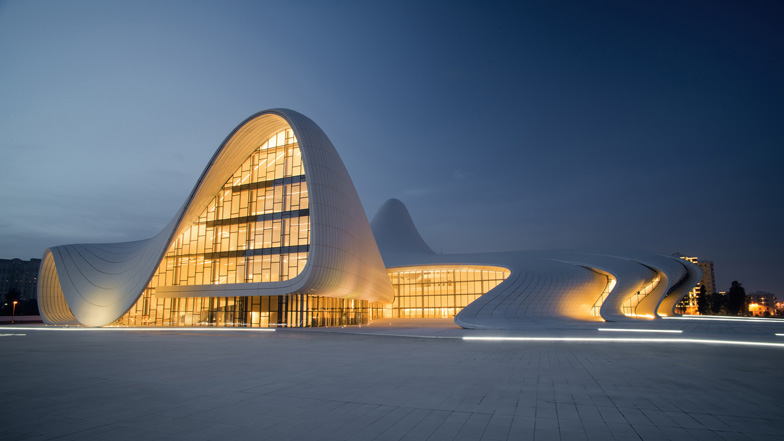 The Heydar Aliyev Center well represents the feeling of optimism of Azerbaijan, a renewed and fast-growing nation, looking positively to the future.

After independence in 1991, Azerbaijan has started a period of intense modernization on the structural and architectural level, moving away from the Modernism of the Soviet Union.

In 2007, Zaha Hadid Architects won the competition to design the Heydar Aliyev Center, a new icon of excellence for the city of Baku and Azerbaijan. The Heydar Aliyev Center is characterised by the fluidity with which it binds to the surrounding environment, and the perfect dialogue with the rest of the city.

The Heydar Aliyev Center is a multifunctional square where interior and exterior seem to merge to accommodate the visitors and make them part of the stage. The public space is conceived as a theatre for collective celebrations of traditional and contemporary Azerbaijani culture.

Designers have added a number of interesting terraces, in order to create connections between the various floors of the building-square. The Heydar Aliyev Center is based on a combined concrete structure with a three-dimensional frame system. The architectural concept has established a different perception of the building during day and night. During the day, the Heydar Aliyev Center reflects sunlight and presents itself to the visitors in a different ways, depending on the perspective and the time of day. In the evenings and at night, the building changes its appearance thanks to a wise use of lighting, offering visitors the depth of the elements that appear behind the facade. The Heydar Aliyev Center is without any doubt the representation of a country that fits into the contemporary world in an original way and with its own defined personality and ability to innovate.

The tradition and the spirit of modernity of the Azerbaijani people are reflected perfectly in this icon of architecture, engineering and culture, destined to be a welcoming gateway for the world and a testimony of a country on the move.