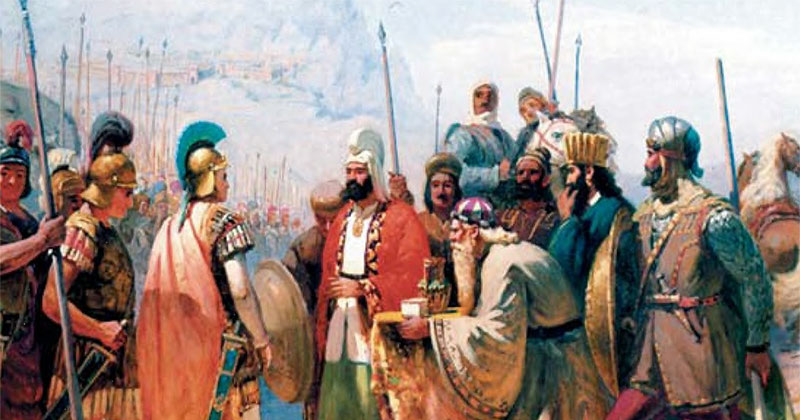 Azerbaijan is located between southeast Europe and Western Asia.
Nobody knows about the most ancient Paleolithic people that inhabited the area of Azerbaijan, but research has found that they used to live in places like the Azokh Cave, where traces of life and hunting tools were discovered.

In the 9th and 8th centuries BC, Azerbaijan was home to two populations, the Caucasian Albanians (that are not in any way related to the modern population of Albania) and the Scythians. The first populations lived in the North East, becoming an independent entity.

The Scythians were nomadic people that ruled a large portion of the known world. The area was then ruled by the Persians, another Iranian population.
Persian culture left a profound influence on what would become Azerbaijan.
The Persians ruled their vast empire by dividing it into provinces, the satrapies, ruled by satraps.

Atropates, a satrap and a friend of Alexander the Great, who lived between 370 and 320 BC circa, was the one to give the name of Azerbaijan.

Then Azerbaijan came under the rule of the Parthians, the well-known enemies of Rome.

Christianity became the official religion of Caucasian Albanians in the 4th century AD, while the Iranian rule continued with the Sassanian Empire.

In the 7th century, the Arabs conquered those territories bringing Islam to Azerbaijan.
The rule of the Arabs lasted for a few centuries.

Then the area was invaded by the Turks, with the Seljuq Empire.
Turks were very influential, and still today the Azeri language is based on the Turkish language.
Turks promoted art and architecture, acquiring the heritage of the Persian civilization.
Azerbaijan was home to great and fine poets in that period of time, such as Nizami Ganjavi (1141-1209).